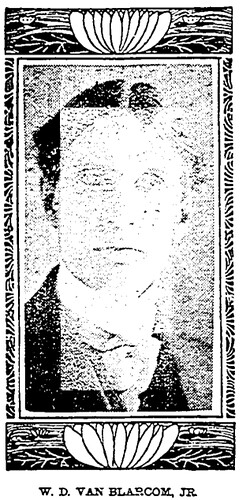 It was a week ago when newspaperman W.D. Van Blarcom, Jr., known as Van,Â  helped wife Emily, a Wyoming gal and a gifted china painter, onto the white, ascending Angels’ Flight carriage and made a most distressing speech: "I can’t be good; I want to be bad. I shall be bad. My brothers and sisters have always said that I was the black sheep in the family. Now I will prove to them that I am. Good-bye. Go home and wait for me."

Her story: "My life has become a blank. It is as if I had run against a stone wall. I shall commit suicide. If only he would come back—if only he would let me know why he went—if only I could go to him. And yet they say he has done this thing before. I have reported his disappearance to the police and they can get no trace of him. One minute I believe he has committed suicide and the next I believe there is a woman in the case. Yes—there must be a woman in the case. But in any event, there is nothing left for me. I shall take my life. About a week ago I was arranging some of his clothes in a closet, when a bundle of letters fell on the floor. One of them was from a woman in San Francisco, in which she wrote of a violent attachment for my husband, and added: ‘I suppose you are having a lovely time with you —.’ I am the blank! Think of it! We had a little tiff over this letter and in taking it away from me he tore my arm with his nails, see, here is the sore place yet. Then when I agreed to burn it up and he saw me do so he swore with uplifted hand an oath to his dead mother than nothing but death could separate us. That was just a week ago today. Last Monday he was very despondent and did not come home as promised, and I went down to the newspaper office where he was working and tried to cheer him up. Then I went to Secretary Stevens of the Elks lodge and had him telephone my husband and ask him what was the matter. ‘Everything is all right now; tell her to come over here at once,’ he answered. I went and that is when he took me to the foot of the Angels’ Flight and told me that he wanted to be bad. Finally he sad that he would come home at 3 o’clock in the morning, but he never came."

Emily said that Van was related to Lincoln portraitist A.J. Conant and to the wealthy St. Louis Van Blarcoms—a branch with a blackish sheep of its own.

*note: Angels’ Flight has its oft-missing possessive in the 1904 article in the Los Angeles Times from which this entry is adapted.
Â