Ahoy Hill hipster!  It”™s been an exciting time here On Bunker Hill.  Through the grace of George Mann”™s family, the other day Kim posted twenty-one images of BH in living doomed color.  One of those featured the Sunshine Apts. with the Hill Crest looming o”™er; a few days later the esteemed Jim Dawson posted all about the Sunshine, including a new Mann image that showcased a year”™s worth of growth where the Hill Crest once stood.  And now, for your edification and delectation, more. 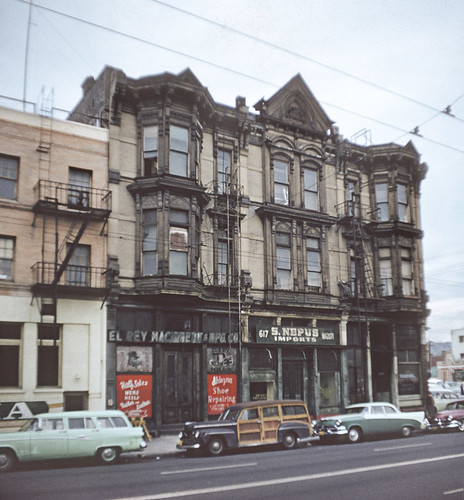 Louis Sentous was one of the great French pioneers of Los Angeles who”™d arrived penniless, panned for a little gold and became a successful cattle rancher, trading meat and dairy at the Plaza until he bought the nearby piece of property (bounded by Sunset, Spring, Main and Macy) that was to bear his name. 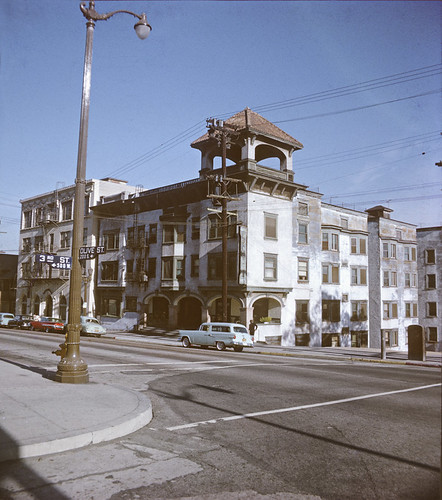 Nothing says deep arcaded entry and red-tiled bell tower like “Astoria”.  Yes, one can not help but marvel at the incongruity of Bunker Hill naming systems.  I wrote earlier in OBH about the red-tiled onion domed Minnewaska, the fairly Franco-Renaissance Sherwood, and while it hasn”™t been explored yet, the decisively Mission-styled 1904 Mission Apartments at Second and Olive spent much of its young life known as, of course, Castle Craig.

Astoria, the Greek word for quail, is also the part of Queens known for being full of Greeks.  That notwithstanding, at the time of its construction, Astoria connoted the Astoria, Queens that was then the “Hollywood of the East.”  Plus it had been named for John Jacob Astor.  All sorts of cachet.  Perhaps the developers thought that despite the arches and fauxdobe, the rather otherwise traditional use of the bay windows prevented naming the structure something vaguely Missiony like “Ramona Hotel” or “PortolÃ  Apts.”

Next to the Astoria is the 1916 Blackstone Apartments, with the nice Beaux Arts garlands upon”™t.  Not a whole lot happened there, an ex-cop caught violating the Wright Act, and there were some lady bootleggers; while the Widows Protective League Los Angeles Branch Council met at the Blackstone, a widow took poison and offed herself there the very same year (1929); and Ross Page, younger brother of the widely-known “Farmer” Page, was busted there by the vice squad while running two bridge games and a poker game in August of ”˜25.

That din emanating from Bunker Hill these days is the relentless pounding of the jackhammers tearing down the ancient Blackstone Apartments, 244 S Olive St., next door to the top of Angel”™s Flight. 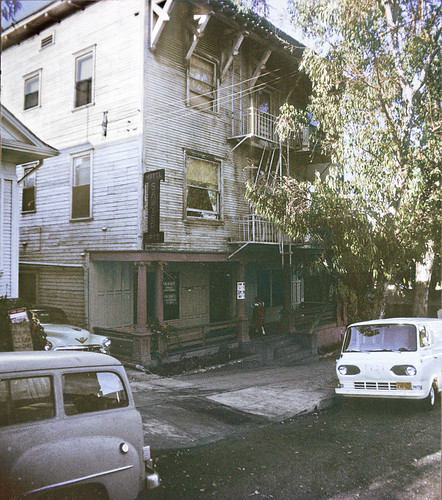 Not one of the gingerbreaded, parapeted wonders of the Hill.  So where was it?  327 South Hope, that”™s where.  (God bless City Directories and old phone books.)  And bless George Mann for shooting something other than the Usual Suspects.  Sure, 327 is on The Map, but this is a color pic.  And yet”¦again, one always needs more; there”™s something about placing oneself in the landscape.  So, comparing maps, and building outlines, and digging through photo archives”¦ 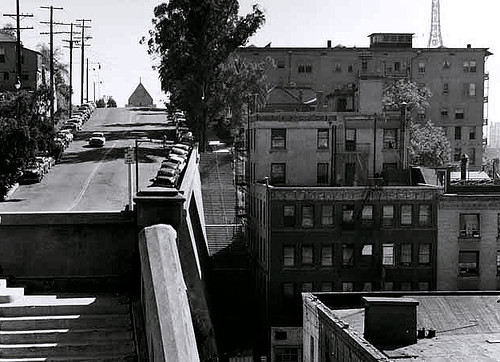 The tree in our color image is the tree dead center above, and the large building jutting out to the right of the frame (Richfield tower visible behind) from Hope and plunging down the hill toward Flower, that”™s the Sawyer. 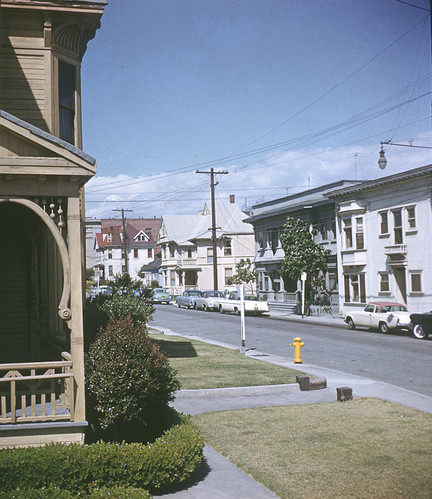 We stand adjacent to a bit of spindlework at 333 South Bunker Hill, between, of course, the Salt Box behind our left shoulder and the Castle on the other side of 333.  Whitey there on the right with the dentils is 326 South Bunker Hill, but its real address is 325 South Grand, as this is the backside of the Kenneth Apts.  Its blue neighbor with the deep columned entry is 322/318; it had a non-conjoined counterpart of 319/323 at Grand and together they were known as the Alta Cresta.  Its beige neighbor to the north with the porch is 310 and there”™s a small house behind it that”™s either 306 or 302 South Bunker Hill.

And then the white house with the cross-gabled red roof, that”™s 256 South Bunker Hill.  That one is extra cool because it”™s where Liz the exotic dancer/modern painter/serial killer (Indus Arthur) lives in Angel”™s Flight.  In fact, it”™s not two minutes into the movie when Liz commits a murder right on the benches above the Third St. tunnel, and the landlady sticks her head out and screams!  To wit: 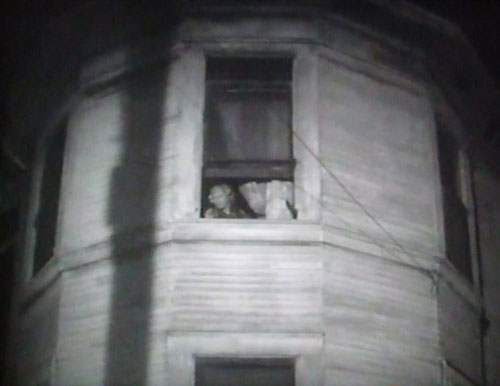 And last but not least”¦ 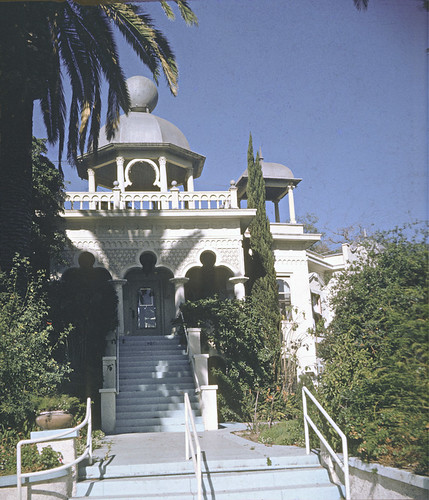 At least it”™s a mystery to me.  It”™s not within a gallon of Ethel of the DT, of that I”™m pretty certain.  Mann shot all over, Point Loma, Catalina”¦so here”™s this Victorian Exotic Revival that”™s going for something Indo-Moorish, though what that is I can”™t say ”“ do you know?  There”™s what appears to be a “701” on her stairs.  OBH readers are the best and the brightest:  whence came this sweetheart and whither did she go?

3 thoughts on “All the More Mann”