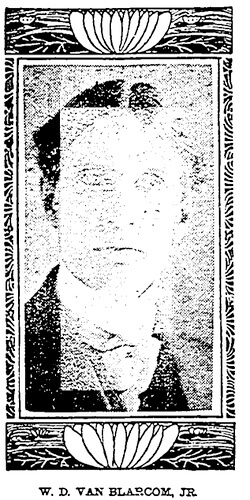 The newlyweds kept a modest apartment here at the Alta Vista. Oh, it may have been something of a step down in the world for bride Harriet Fencel Easton Allen, 25, who had attended USC and UCLA and studied art for two years in Europe, and whose father John was former superintendent of the L.A. Athletic Club and manager of the Jonathan Club, but then again, it was convenient to husband Robert Allen’s cafe at 257 South Olive.

Early this morning, Harriet woke to a knock on the door, and she answered without waking Robert, but soon she was screaming and running back toward the bedroom, "Bob, Bob, wake up! It’s Bruce!"

Yes, it was T. Bruce Moore, 42-year-old drug clerk, longtime friend of Bob’s and rival for Harriet’s affections, and he had a gun in his hand. Just a few days ago he’d gone into the cafe and said that if Bob didn’t make Harriet happy, he’d kill him, but he’d apparently reconsidered, because it was pajama-clad Harriet whose brains he blew out. She fell at her husband’s feet as he woke in confusion, then saw her assailant shoot himself in the head. Moore lingered for a few hours at Georgia Street Receiving Hospital before dying.

In the killer’s pockets were year-old seaside photos of himself with the dead woman, and on the back of one he’d penciled a last will and testament leaving his insurance, furniture and some land in Arizona, total value $2255 to his sister Elsie Bitner. But this will would be challenged in court when Mrs. Carol E. Moore came forward claiming to be Moore’s widow, as their divorce decree had not been entered at the time of his death.

Traffic expert Edmund C. Easton of this address spoke today before the Police Commission. Based on his fifteen years of study of automotive congestion in Los Angeles and other large cities, Easton advised the following measures for easing gridlock: street clearance through adequate design, regulation and police enforcement, trolleys given right-of-way, one-way streets, and controlling both jaywalking and automobiles "shooting" into cross-sections. The Chief is considering his suggestions, and we are certain that by 1940, traffic jams will be but a distant memory to our burg.

In Municipal Court today, Judge Scheinman found George Parent, 32, bookkeeper of this address, guilty of petty theft on the accusation of attorney Stewart P. Fisher. Fisher said he’d given Parent $6 to bet on Gillie in a horse race on February 16, but that the bet was not placed. Parent’s unconvincing defense was that he believed that because Gillie’s stable mate Peradventure had been scratched, Gillie was not open for a bet. After his conviction, Parent asked for probation, and a hearing was set for March 7.

Herbert Maas, 19, resident of the Alta Vista at 255 South Bunker Hill Avenue, was strolling with Alice Averill of 332 South Bunker Hill near Fifth and Fremont Streets when they were accosted by a four bandits who pulled up beside them in a car. Two of the men jumped out and grabbed Herbert, hustling him into the back seat. Then they drove away, leaving Miss Averill on the sidewalk. Near Orange and Figueroa the crooks relieved Herbert at gunpoint of $15, a gold watch and a stickpin. He must have been anticipating they’d soon release him when the man on his left, shaking from nervousness, suddenly fired his weapon. The bullet went through Herbert’s back, and next thing he knew, he’d been shoved onto the street in front of 1127 Orange Street. The wounded man made it into the Baltic Apartments, where he found aid and was taken to the Receiving Hospital, where he was listed in serious condition with a bullet through his lumbar region possibly nicking his peritoneum. A search was on for the highwayman, but there was no further news published about Herbert’s condition or any arrests. Ten years later, an Alice Averill was appearing around town as a chorus girl, in "Topsy and Eva" (a part she repeated on Broadway) and "A Connecticut Yankee."