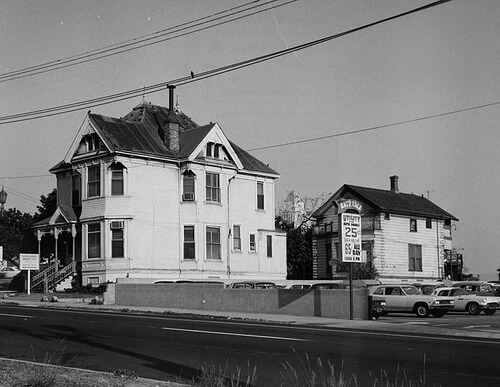 By the spring of 1968 only three of the great mansions on Bunker Hill were still standing. The Castle (325 South Bunker Hill Ave) and Salt Box (339 South Bunker Hill Ave) were soon to be moved to their new home, Heritage Square in Highland Park (and subsequently burned down by vandals).  The days were definitely numbered for the Victorian beauty at 232 South Grand Avenue and smaller house behind it whose address was 232 ½.  The only reason the residences on Grand Avenue stood as long as they did is because the Community Redevelopment Agency (CRA) made the front house the location of their Bunker Hill Relocation Project Office. Once the residents had been removed from the neighborhood and the CRA no longer had a use for the mansion, it too was removed. The mansion at 232 South Grand Avenue and its backyard neighbor at 232 ½ were built in 1894 by Bernard Sens, a German immigrant who came to Los Angeles and set up shop as a tailor on Broadway. He had initially been residing a couple of doors down at 224 S. Grand, but apparently needed a more suitable dwelling for his wife, four sons, and six daughters. He held onto his former residence and began renting out its rooms, and presumably did the same thing with the house at 232 ½. Sens was a well respected tailor about town and had provided the city’s police force with their uniforms. The business was a family one, with the Sens sons contributing at one point or another. Matriarch Kate and her daughters received mention in the society pages and the Sens were a typical Bunker Hill family of the Victorian era. Bernard passes away in 1903 and his widow and their daughter Emma resided in the mansion until Kate’s death around 1923. Like most of the other neighborhood mansions, in the mid-1920s, 232 S. Grand Ave became a boarding house. Unlike many of the Victorians that were divided into numerous single room residences, the division of the former Sens home provided lodging for only four separate households. Around 1928, Dr. James Green, his wife Elizabeth, their three daughters, and two grandchildren moved in and had enough room for the doctor to also set up his practice.

Dr. Green, who had been born in England and spent time in Colorado before moving west, would serve Bunker Hill residents as their physician for nearly thirty years. Dr. Green seemed to have done a fine job taking care of his patients, with the exception of sixty-five year old Theresa Dawson who, while under the doctor’s care, strangled herself with her own bandages at her home down the street. By 1939, the mansion had once again become a single family home with the Greens as its sole tenants. The doctor was paying a whopping $100 a month (around $1,200 in today’s dollars) to live in and run his business out of the ten room mansion. Dr. Green lived and worked on Bunker Hill until his death in 1956. His wife, Elizabeth, continued living on Grand until her death a few years later. Since the house was not inhabited by numerous boarders, it proved to be an ideal place for the CRA to set up its relocation headquarters in 1963. It was here that Bunker Hill residents, some of who had lived in the neighborhood for decades, received their walking papers. When the dirty work was completed in 1968, the houses at 232 and 232 ½ South Grand Avenue went the way of the rest of the grand mansions of Bunker Hill.