People land on cars. They just do. It’s how Daredevil and Crank end; it’s how Lethal Weapon begins. Pauly lands on a car in Darkman; Conan O’Brien lands on a car in South Park: Bigger, Longer and Uncut. And then there’s George Costanza’s suit against the hospital whose mental patient landed on his automobile. Clinicians call it the Evelyn McHale Syndrome, or at least I do.

In December of 1941, Mrs. Charlotte Neill, 70, called the gas company to turn on service at 2536 Reservoir Street. The Gas Co. sent out Perry C. Butler, 48, who attacked her, causing shock and other injuries necessitating her hospitalization.

Arrested the 26th, arraigned the 29th and free on bail, Butler was five days later, for some reason, atop the Subway Terminal Building. But not for long. It’s unclear as to whether he fell or jumped the ten floors and crashed to the top of a car on the roof of Savoy Garage.

Assuming Butler jumped, it makes one consider that the auto is the modern equivalent of the sword, which Saul so famously fell upon after battling the Philistines. But consider: Detective Lieutenant B. G. Anderson was lead investigator in the apparent suicide attempt. Because Anderson was also, by coincidence, arresting officer in Charlotte Neill’s attack case, it makes one wonder if this particular car-landing didn’t have an element of the Ness/Nitti to it.

Above, the Subway Termial Bldg at right, adjoining the low-slung Savoy Garage onto which Butler made his car-smashing plunge.

When it rains, it pours. Which is probably a good thing, since rain will put out all that pesky fire.

Van R. Alexanian, 23, was loading a barrel of rubbish into the scoop on the front of his trash-truck when the parking brake gave way. The truck ran into an electrical pole, and the live wire caught the truck debris on fire. The pole then fell onto a Mrs. Helen Stairs, 50.

The flaming truck went on to take out a traffic signal and a lamp post before crashing into a garage. This much was fortunate; the garage attendant was equipped with a fire extinguisher.

Officer L. S. Rasic commented that had the truck continued through the intersection, it would have crashed into eight cars waiting for the signal to change.

The question remains as to what garage the garbage truck plowed into, as there were in fact three at Olive and Fourth: the 1923 Mutual Garage at the NE corner, the 1919 Hotel Clark/Center Garage at the SE corner, and the 1923 Savoy Garage at the SW corner. Here’s a picture of all three, 1966:

Remarkably, the Savoy still stands. The 600-car Mutual at left in the image above is now the foundation for Cal Plaza Two. The Hotel Clark Garage, center (along with that tall white building, ironically named the Black Building) is still an empty lot, site of what was to be Cal Plaza Three. (The parking lot at foreground right was the former site of the Fremont.)

Should you wish to learn more about garages, please do so here. 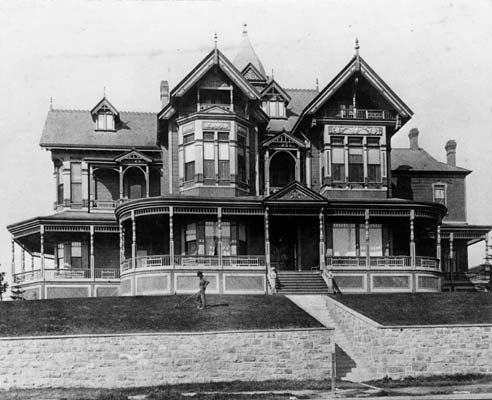 The demise of Bunker Hill conjures up image of bull dozers doing the bidding of the Community Redevelopment Agency, leveling the landscape of the once colorful and picturesque neighborhood. While the CRA’s master plan dealt the final blow to Bunker Hill, the demolition of victorian structures in the area had been taking place for decades. The Brunson Mansion at the corner of Fourth Street and Grand Avenue was an imposing structure that seemed destined to stand indefinitely. Instead it would last less than four decades and become an early victim of the City’s obsession with the automobile.

The residence known as the Brunson Mansion was built in the early 1880s by Judge Anson Brunson who resided on the bench of the Los Angeles County Superior Court before stepping down to serve as a lawyer for the lucrative Santa Fe Rail Road. According to the L.A. Times, the residence was “a dark red house, large, compact, dignified, in the center of sloping lawns walled up above the level of three streets.” The house was so large it had a Bunker Hill Avenue and a Grand Avenue address, before settling on 347 South Grand as its official label. The Judge resided at the home with his wife Angela until the early 1890s when details of his torrid affair with the widow of a Civil War General came to light. In December 1892, Mrs. Brunson filed for divorce on the grounds of desertion, extreme cruelty and adultery. She was supposedly in possession of hotel registers and love letters, one of which read like “an extract from a French novel,” documenting the relationship between her 60 year old husband and Mrs. General George Stoneman, 10 years his junior. The Judge had left the Grand Ave property and taken up residence on Flower Street and Mrs. Brunson stayed in the mansion until she was forced to sell it in 1894. While Judge Brunson denied the existence of a romantic relationship between him and Mrs. Stoneman, when he died in October 1894, he left all his possessions to “my dear and faithful friend, Mary O.H. Stoneman.” Years after the mansion was long gone, locals felt that the “ghosts of unhappinesses remained there,” haunted by “the husband and wife who for years lived as strangers under the same stately roof.” One of the mansion’s next owners was Dr. B.F. Church, who with his wife, used part of the house as their residence where numerous social gatherings were held. The doctor converted the other part of the house into the short-lived Los Angeles Eye, Ear & Throat Hospital aka The Eye and Ear Infirmary until 1901. Eighteen years later, B.F. Church, who had suffered years of mental problems, would throw himself out of an office window at 7th and Grand, plummeting to his death in front of a lunchtime crowd.

In the early years of the new Century, the 18 room property became the Hotel Brunson. Its thirteen years as a boarding house would see little incident other than almost getting burned down by a wayward firecracker in 1904, and the shooting of a burglar by a hotel resident in 1909 (the police followed the trail of blood and apprehended the suspect at his nearby home).

By 1917, the automobile had come to Bunker Hill and the owners of the property at 347 South Grand decided that a two story brick garage would be more lucrative than a hotel. In April of that year, the furnishings of the Brunson Hotel were auctioned off, and stately structure which was once a “show place of the city” was demolished and replaced by an auto mechanic.