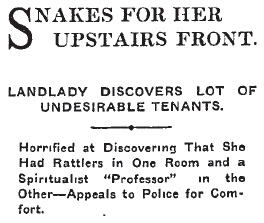 While she mused about the spiritualist fakir, it’s unlikely that she gave any thought at all to Mr. and Mrs. Harry Holley, a pleasant married couple who had moved into the house a few days earlier.Â  They had been occupying a room on an upper floor, but when the larger room adjacent to them became available, they’d jumped at the chance to rent it.Â

Because the Holleys were out for the day, the landlady decided to do the couple a favor, and began to move some of their belongings into their new room.Â  It was probably the last time in her life that Mrs. Clark would act on a generous impulse. When she swung the door open and entered the room, she nearly stepped on an enormous slithering reptile!Â  Quickly looking around to assess any further danger, she spied another, even larger snake coiled up in a chair across the room. The serpent met her gaze and began to hiss, and that was enough for the landlady. She slammed the door and careened down the stairs, screaming for help.

The only lodger who didn’t immediately come out to see what all the ruckus was about was the bogus professor.Â  When he finally poked his head out of his room, his only comment was “It isn’t a snake, it’s the spirit of a dear departed sister”.Â  Mrs. Clark didn’t want to hear it. Departed sister or not – all she wanted was to get the snakes out of the house.

The panic stricken woman phoned the local precinct house, saying “Send some policemen and a patrol wagon quick, my house is full of snakes!”Â  To which the jaded desk sergeant replied “Snakes, eh, you say you got’em?”Â  If she could have done so, the exasperated woman would have reached through the telephone lines and throttled the cop into unconsciousness.Â  Finally, after what must have seemed like an eternity to the anxious Mrs. Clark, the desk sergeant said that he’d connect her with the police surgeon, Dr. Quint, whom the bluecoat declared was an “…authority on snakes”.

Across the crackling telephone wire, Dr. Quint heard someone say “Is that the snake doctor?” Dr. Quint told the shaken woman that he’d been called many things in his time, but never a snake doctor. Mrs. Clark then recounted her tale of serpents, fakirs, and terror – oh my. The good doctor suggested that she simply wait for her snake handling lodgers to return, and then demand that they remove the creatures at once.

The Holleys arrived home to find all of the inhabitants of 421 S. Hill Street milling about in the yard, except for Professor Maclane, who was no doubt busy communicating with spirits of the dearly departed.Â  Mrs. Clark strode up to the couple and demanded that they remove the reptiles from the premises at once. Mr. Holley admitted that there were dozens of serpents sharing his room, but firmly stated that he would do no such thing. He’d paid for the room for one week in advance, and he flatly refused to budge.

Hill Street
boarding house.Â  The residents remained behind locked doors in mortal terror, fearful of every little sound. Mrs. Clark stayed in her room to keep a close watch on her three kittens. She was convinced that the Holleys were plotting to feed the adorable little mousers to the nefarious vipers.