One cannot help but be enamored of the Nugent. Maybe it’s the big spooky tower. Maybe it’s the Nugent’s corner site at Third Street and Grand Avenue…3rd & Grand just purrs off the tongue, which only seems to further imbue that location with the status as Ground Zero, Bunker Hill.

But truth be told, the Nugent was never a hotbed of vice, should you be perusing our OBH blog to sate your currish needs. Heck, a 1905 article about the original White Ribboners who fought demon drink back in the early ‘70s mentions that crusading Quaker Josephine Marlatt chose the newly-opened Nugent as her home.

The Nugent’s most notable resident was a Southern Pacific brakeman by the name of Walter J. Dean. It was March 10, 1935, and Dean was busy plying his honest trade out in Pomona at a railroad right of way while a train crew was switching freight cars in the local yards. Then some woman, as high and as mighty as they come, decided to drive her automobile across said railroad right of way; this enraged Dean, who pitched his lantern through her car windshield. Unfortunately the woman was Mrs. Lois Browning, wife of Desk Sergeant Browning of the local police force, which might give some insight into her high-and-mightiness.

And so, while I’d like to say that every resident was a pill-pushing pedophilic grave-robbing ghoul (or at least you’d like to read such), we’ll just have to content ourselves with pretty pictures. I must admit, my inclusion of the Nugent (which became the New Grand some time in the 1940s, to be pulled down in the mid-1960s by the CRA, naturally, ad victoriam) is due in larg

e part to the wonderful color image I am fortunate enough to here include.

(If you really must read of murder most foul, note the Alto [at 253] having been built just the other side of the New Grand.)

Bunker Hill had, without question, the highest per-block concentration of Corinthian capitals in Los Angeles.

One does have to wonder as to whether the two-story Corinthian columns were always broken up by those fire escapes.

The deli has become a KooKooRoo. I had half a mind to march in there and say yeah, gimme a couple of your Landjäger, and a Csabai Kolbász, and a half pound of something Italian, Sopressata maybe, sliced thick, and something Jewish for the wife, say a pound of brisket, then let me have a fist-sized thing of herring, in brine not cream, and a pickled egg to go but of course like the rest of Bunker Hill, there was no-one there.

With the New Grand gone, the 1970s and 80s thrilled to this hole in the ground. (Here, we are facing the other way down Grand from the image above.) At left, the 1982 Skidmore, Owings & Merrill Crocker Tower II and at right, the 1973 AC Martin Security Pacific National Bank Plaza tower, butting up against Third (the road in the foreground would becomeÂ  Thaddeus Kosciusko).Â  Then West-LA Nadel Architects (who are at present in charge of designing two thirty-story towers at Third & Beaudry) showed up in 1988 and said here:

And in went the Grand Promenade Towers.

But that’s not why we’re here. Not really. As I alluded to earlier, this post is really all about the Nugent/New Grand, 1952—in color:

(The IU Archives were very kind in granting us permission to publish their images here on On Bunker Hill. You are advised to go to the Cushman temple and worship accordingly. Exempli…South Main on a Sunday…peering down Harlem Place at City Hall…a length of Broadway, including the Mason Opera House, before it was wiped out by a 1957 parking garage [which itself was recently razed]…and the corner of Wilshire and St. Paul, hardly changed a bit.)

W.D. Montgomery and his stepdaughter, Mary Meister, arrived in during October 1904. W.D. had purchased the Hotel Lincoln, at 209 South Hill, with funds provided by his wife, Laura. She soon followed the pair to , and the three took charge of the day to day running of the hotel. At first everything appeared to be going well for the new owners, and they seemed to be an average hard working family. Yet beneath the surface the household was filled with discord and secrets, and it would take only a few months before everything began to unravel in a very public way.

W.D. had never been a teetotaler, but once in he’d started drinking heavily. Maybe it was the stress of W.D.’s drinking, but Laura’s rheumatism began to flare up to the point where she became bedridden. Mary was in charge of Laura’s care, but after downing several whiskeys, neat, W.D. decided that he would take over. His bedside manner left everything to be desired. When Laura felt too unwell to eat her lunch, he told her that she would eat every morsel if he had to “cram it down her throat”. Not surprisingly, Laura’s appetite didn’t respond well to this threat, and in a fit of pique W.D. grabbed the lunch dishes and hurled them out of the window!

Laura tried to persuade W.D. to attend one of Francis Murphy’s temperance meetings and take a sobriety pledge. W.D. wanted nothing to do with Francis Murphy or sobriety, and in a fit of rage at his wife’s suggestion, he smacked her.

Everyone who came into contact with the couple thought that W.D. was nothing better than drunken brute, particularly when in full view of several hotel guests he chased Laura through the hotel, then grabbed her by the throat and throttled her. Although W.D.’s drinking and behavior had certainly spiraled out of control, he may have had good reason for behaving so badly. He’d become convinced that Laura was being unfaithful and had started following her. He trailed her several times to an obvious assignation in . Later, at home, W.D. confronted Laura and she confessed her infidelity. After 13 years of marriage, the couple divorced.

By July 1905, Laura had run off with the railroad man with whom she had been having an affair. The hotel had been sold to Mrs. Belle McWilliams, and W.D. and Mary were running it while the deal was being finalized. 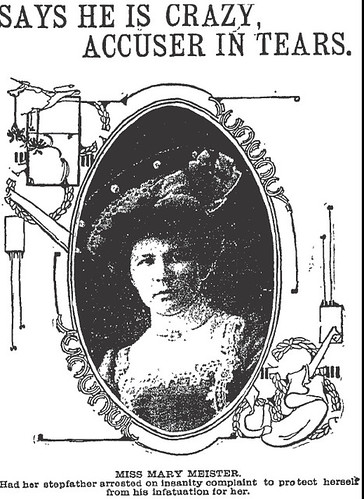 Suddenly, Mary came forward with shocking allegations against W.D. She said that he had ruined her (early 1900s doublespeak for seduced), and that he had been going around town telling anyone who would listen that he was in love with her. One day at the corner of First and Broadway, W.D. began to shout at his stepdaughter, saying that if she turned her back on him he would kill her and then himself.

It was his downtown outburst that compelled Mary to have her stepfather arrested on a charge of insanity. The two appeared in court to try to settle the unholy domestic mess. Mary broke down on the witness stand and began to sob. All eyes were on her as she turned to W.D. and said “You have ruined my reputation, and now I don’t know what to do”. W.D. Montgomery looked astonished. “I didn’t do anything of the sort” he replied, “I would marry you tomorrow”. Then W.D. went on to shock the courtroom further by saying “I thank God that the railroad man ran away with my wife”, adding, “I didn’t love her and she knew it”.

By the time Mary and W.D. were finished testifying, the spectators were left wondering what exactly had been going on at the Hotel Lincoln, especially before Laura arrived to join W.D. and Mary in 1904. Could they have been having a relationship then? Was that the reason Laura had become involved with the railroad man? Mary was tight lipped, but wouldn’t deny that she and W.D. had been engaged to wed! Meanwhile, W.D. continued ranting and raving in court, and finally had to be taken to the for observation.

With Mary embarrassed to be seen in public and W.D. babbling away in the , the story may 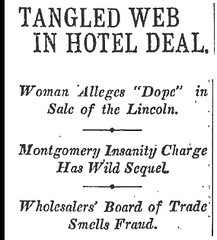 have ended there – but one more bizarre chapter remained to be written.

Someone contacted police, telling them that the reason W.D. Montgomery’s behavior had been so erratic was because he had been drugged by a person (or persons) who wished to gain control of his property! The former hotel owner had been deeply in debt when he sold the to Belle McWilliams, and it was later learned that he had borrowed against furnishings that he didn’t own. Not one single bill was paid by the during June, even though receipts showed that $1000 had been received from patrons, and that W.D. had obtained a loan of several hundred dollars.

Then, one night in early July, W.D. crept down to the safe and made a hasty $1100 withdrawal. He was discovered later in the gutter – drunk, disheveled and penniless. Shortly thereafter, bankruptcy proceedings would be instituted against him.

A bankruptcy hearing would be held, and the judge would hear varying accounts of the deal to purchase the Hotel Lincoln. According to Mrs. McWilliams, she’d been given a bill of sale by W.D. in the amount of $8000, but she would actually pay only $6900 for the hotel. That shady little sleight of hand was intended to defraud W.D.’s creditors to the tune of $1100. Belle told the court that she wasn’t wild about the plan, but she’d gone along with it because W.D. owed her money.

Sadly, there would be no further reports of W.D.’s colorful exploits in the Los Angeles Times.