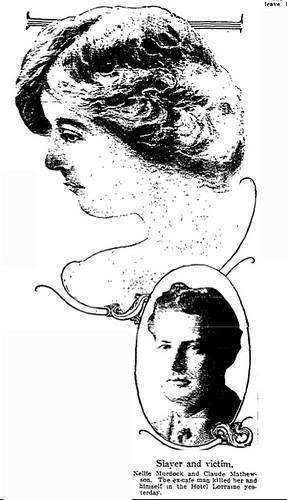 Late Thursday night, he went to the hotel to look for Nellie, and waited until she returned from Vernon. They fought, and she told him she intended to leave him, and had been saving her money to get away the very next day—Good Friday. Is that so, mused Claude. Because he too had been waiting and planning something for the morning, only his plan was to kill Nellie. He had waited fourteen days to perform this grim act on the most auspicious date. Nellie sat shocked, then ran to a friend’s room to say that Claude was mad. But she must not have taken him seriously, since she returned to her room and continued the discussion, and all night they quarreled.

Grace E. Smith made the Dome her home. From there she made the trek to work down to the Belmont Grill. It’s 1949. She’s a B-girl.

Vice has been coming down on prosties of late and joints like the Belmont that run B-girl operations are a thorn in the side of decent society. The racket is simple: the gals chat up the fellas, and as a gal mingles with the patrons she induces them to buy more drinks. Her bourbons are colored water or ice tea; she gets a commission of those sales. And if she takes off with her new friend, we’ll call him, oh, John, the tavern owner gets a cut of her earnings. Repeat.

After a while Vice gets tired of dealing with pimp beat downs, or customers given the mick finn, so it’s time to round up the ladies. Grace E. Smith, 28, won’t get to go home to her little room at the Dome tonight, popped as she was at the Belmont for violating the municipal B-girl ordinance. Tomorrow morning she’ll be out on $100 bail.

The next mention of Grace E. Smith—one wonders if it’s she and the same—is in 1953: a Lena S. Reed, 72, was to leave her $8,000 estate ($61,857 USD 2007) to her family but just before her demise opted to bequeath it to Mrs. Edna W. “Mail Fraud” Ballard (aka St. Germain, aka Joan of Arc, aka Lotus Ray King), cofounder of the I AM religious movement. A judge blocked probate when the family filed contest, accusing Mrs. Ballard of “exerting undue influence on Mrs. Reed while she was in ill health and mentally disturbed.” The same accusations were made against the secretary of the organization’s St. Germain Foundation, and executor of the will, one Grace E. Smith.