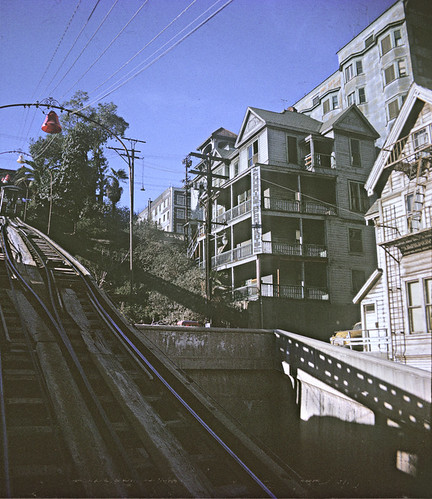 The recent release of George Mann”™s 50-year-old color photographs to this site is one of the most remarkable troves of ephemera we”™ve seen in decades. The accompanying photo, for instance, shows just how dilapidated the neighborhood around Angels Flight on

Third Street
had become by November 1962, when Mann made his final pilgrimage to the doomed neighborhood. The wrecking ball has already claimed the Hill Crest Hotel at the top of the hill on , and the Astoria Hotel is a hulking shell of a firetrap just waiting for a match. Standing near the center of the photo is the Sunshine Apartments, looking empty and haunted, but who knows whether a few derelict souls are still inside, refusing to leave until the bulldozers come growling down the hillside?

421 West Third Street
has been gone now for over forty-five years, but it”™s still one of the most familiar unknown houses in . Perched on a ten-feet-high retaining wall above a narrow alley called , it sprawled halfway up a steep hill adjacent to a stairway, its only access, opposite Angels Flight. The Sunshine was the sort of multilevel dwelling that novelist John Fante described in Ask the Dust (1939): “It was built on a hillside in reverse, there on the crest of Bunker Hill, built against the decline of the hill, so that the main floor was on the level with the street but the tenth floor was downstairs ten levels.” The only difference is that the Sunshine was only four stories tall and its front, not its sides, conformed to ”™s slant, so that the first floor was only half as wide as the second floor.

Constructed on vacant property around 1905 to accommodate downtown Los Angeles”™s growing need for cheap housing, the Sunshine looked like a huge clapboard farmhouse, with a stack of three unadorned verandas and a couple of Queen Anne touches around the front entrance, which was on the third floor. Midwestern migrants probably found the place comfortably familiar. Inside, a labyrinth of odd-angled hallways, step-downs and staircases connected the Sunshine”™s many small apartments.

Though it made its film debut as one of Angels Flight”™s neighbors in a 1920 comedy called All Jazzed Up, the Sunshine didn”™t get its first close-up until 1932, when director James Whale cast it as the home of two downtown working girls (Mae Clark and Una Merkel) in The Impatient Maiden, his follow-up to Frankenstein. Because sound cameras in those days were large and unwieldy, he used a smaller silent camera to shoot the movie”™s opening scene on the

Third Street
steps, as the actresses came out of the Sunshine Apartments and walked up the concrete steps to the Angels Flight station on . (The dialogue and traffic sounds were dubbed in later.) Whale shot another scene on the front steps near and in the rear of the apartments, where a second set of concrete stairs from Clay to Olive ran between the Sunshine and the much larger Astoria Hotel.

But what turned the Sunshine Apartments into a fairly steady (if nameless) character actor was film noir, the mostly post-World War II crime genre that, in its focus on documentary realism, introduced the use of smaller, combat-tested cameras and gritty urban locations to Hollywood cinema. And since–by the mid-1940s– was a run-down neighborhood of crumbling Victorian mansions, rambling flophouses, and mean, vertiginous streets, it became the perfect setting for film noir”™s fascination with the dark side of American prosperity. Despite the Sunshine Apartments”™ sunny moniker and relative youth (less than fifty years old), it did a great job portraying a shabby boarding house for desperate and worn-down people.

In ”™s Night Has a Thousand Eyes (1948), the Sunshine offered low-rent anonymity to a con man (Edward G. Robinson) hiding from his past. Director John Farrow pointedly established its location with an amazing 180-degree shot–taken from Clay Street–that followed one of the Angels Flight cars up from Hill Street, and panned across the top of the hill to catch Robinson”™s character hurrying down the concrete steps and up onto the third-floor porch and into the boarding house”™s front door. Another shot showed John Lund and Gail Russell approaching the Sunshine”™s wooden porch steps from below.

That same year, in Universal Pictures”™ Criss Cross, director Robert Siodmak used the Sunshine as a rendezvous spot for criminals plotting an armored car robbery. Whereas the protagonists”™ apartments in the earlier films were obviously studio creations, some of Criss Cross”™s seedy flophouse interiors were shot on location. Granted, a couple of shots that showed either Burt Lancaster or Yvonne DeCarlo standing next to a bay window, with the Angels Flight trolleys moving in the background distance, were done on a sound stage. The footage of the incline railway cars passing each other above Clay Street was taken from the Sunshine (most likely from the third-floor porch, judging from the angle), but the building itself didn”™t have any bay windows facing Angels Flight, so the scenes had to have been process shots. On the other hand, the maze of dingy hallways–whose atmosphere one character mockingly dismissed as “Picturesque, ain”™t it?”–most likely belonged to the Sunshine Apartments.

In another film, Turning Point (1952), as crusading reporter William Holden and gal pal Alexis Smith ride up Angels Flight, the camera riding with them turns to look across to the Sunshine, where a witness is hiding. But when they walk down the steps from the funicular”™s Olive Street station toward the house, they have to duck into a doorway of a nearby building to avoid several thugs standing guard on the Sunshine”™s porch.

In the low-budget Angel”™s Flight (1965), among the last of Bunker Hill”™s noirs, Indus Arthur played a stripper and “ serial killer” avenging an early rape by slashing the throats of men who put the moves on her. The scene of that rape, we eventually discover, had been at her one-time home in the Sunshine Apartments.

The building also showed up briefly in Act of Violence (MGM, 1949), Joseph Losey”™s M (, 1951), and the cheap Lon Chaney Jr. horror film The Indestructible Man (1956), among others. Documentary filmmaker Edmund Penney introduced his lyrical fifteen-minute film, Angel”™s Flight Railway (shot in the early 1960s and again in 1969; released in 1997) by looking across

Third Street
through the ornate woodwork of the Sunshine”™s doorway.

The Sunshine Apartments finally had its appointment with the bulldozer around 1965, after ”™s Community Redevelopment Agency had already torn down many of the other buildings around it. By the time the CRA carted away Angels Flight and the last two surviving houses on

Yet today the Sunshine Apartments survives in old movies, in countless photo- and postcard-tableaux of Angels Flight, and as the most prominent background feature–painted green–in Millard Sheets”™ vibrant 1931 oil painting, Angel”™s Flight, which is not only one of the most famous works on permanent display at the Los Angeles County Museum of Art, but also the logo of the OnBunkerHill.org website.

I welcome any further information you may have about the Sunshine Apartments, or any corrections to this blog entry. Even better, I”™d love to hear from someone who actually lived or spent time there.

7 thoughts on “Sunshine and Noir”