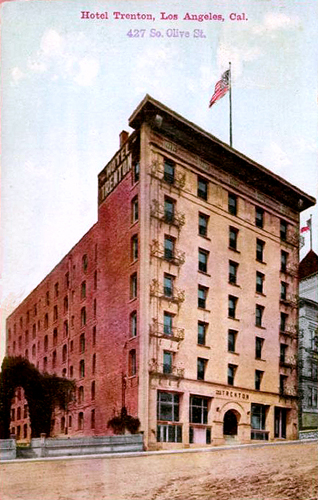 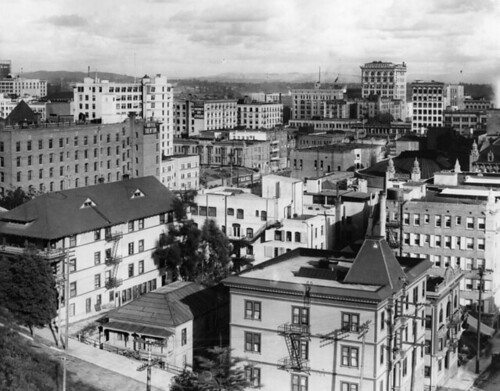 And speaking of imprints, it was July 1905 when a lady guest of the establishment marched into to the Los Angeles Times offices to report her dismay at having ruined her long white skirt, white stockings and slippers when she walked over the streetcar tracks at First and Broadway and picked up a liberal helping of petroleum, which the cars’ operators had smeared on the rails to deafen the screech which otherwise came whenever a curve was taken. A snarky Times reporter noted that had the lady been as eager to lift her skirts when crossing the tracks as she was to show off the damage caused by the oil—"and it’s higher up, too!"—she would not be in such a predicament. 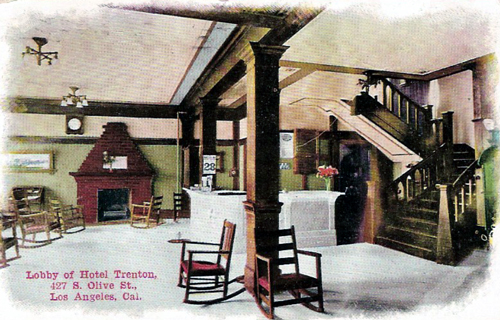 In May 1906, town gossips received confirmation of a scandal, but too late to shun anyone involved. Some months earlier, Mrs. Genevieve Hughes arrived in Los Angeles from Denver and took rooms in the Trenton, where she was paid significant attention by fellow guest, Boston lawyer Charles W. Ward. Ward was briefly a Harvard man who took his degree from Columbia, a gymnast, a Knight Templar and a soldier, every inch the eligible young fellow… well, almost. Again and again he would ask that she marry him, and always she would demur—but not refuse his friendship. On February 28, Ward went into his room and shot himself in the head, and the whispers said it was out of thwarted love for Genevieve. The lady, however, had eyes for another, and quietly married A.G. Jones, also of Boston, departing for an Eastern honeymoon before news of the nuptials spread. And as for Ward, he was, it proved, a bounder, having left a wife and children awaiting the return of his health under the Californian sun. He lingered a few days after being shot, but died before his father could arrive by train. 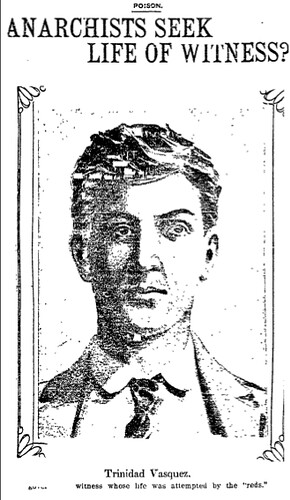 Later that month, the Trenton figured in the notorious jury tampering case of the great attorney Clarence Darrow, who rang up large charges at the hotel for select jurymen, far in excess of the $9 weekly rate that investigators were quoted—though it was the thirty dollars in ten cent cigars that got the jury’s goat. 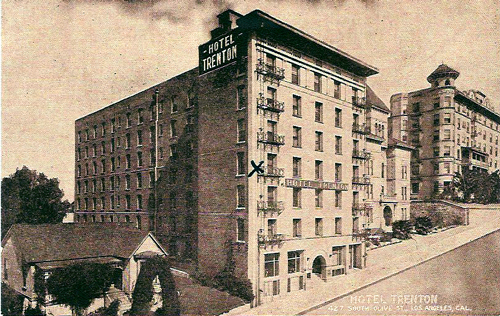 On June 14, 1937 the Trenton hosted its most eloquent suicide, when retired schoolteacher Mrs. Ida Mae Mills, 70, gassed herself with a chloroform-soaked rag alongside an open copy of the book The Right to Die. Her note read, "Remember this—Death should be a smooth finish, not a jagged interruption. There is nothing mysterious nor dramatic about this. Neither was it conceived in a moment of desperation. I think I am as sane as I ever was, but I have long been convinced of the wisdom of mercy killing. Why must I live on, tortured by constant pain, and facing total blindness? My abject apologies to the management for the trouble I am giving them, but I had to have some place to die, didn’t I? I could not vanish into the air."