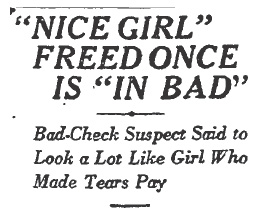 Edna Brown, aka Edna Chaplin, aka Mabel Austin, seemed like such a nice girl. Sure, she’d been busted by Detective Sergeants Bartley and Allen for stealing $100Â ($1,271.00 current USD) from O. Johnson’s apartment at 124 South Bunker Hill Avenue, but Edna did the right thing and confessed to the crime, resulting in her being charged with grand theft and larceny.

When she appeared in Judge Hinshaw’s court for her arraignment, she burst into tears and appeared to be so genuinely remorseful that Guy Eddy, an attorney who was present on another matter, came to her defense and made a motion to dismiss the case. Judge Hinshaw was also moved by the girl’s tears, and since Deputy District Attorney Orme made no objections, Edna walked.

A few days following Edna’s day in court, Detective Sergeants Bartley and Allen were on the trail of a girl who had been accused by J.S. Purdy of using his name to pass bad checks. Purdy told the cops he suspected a girl named Edna. When he was shown a photo of Edna Brown, he immediately identified her as the forger.Â