The most sensational trial of 1953 has to have been that of Barbara Graham. The defendant was accused, along with Jack Santo, Emmett Perkins, Baxter Shorter, and John True of the beating death of Mrs. Monahan during a home invasion robbery.Â  The crime itself was so banal that it may not have made it to the front page of the LA Times at all, and it definitely wouldn’t have stayed there for as long as it did had it not been for Barbara, an attractive 29 year old prostitute and drug addict.Â

The story had all of the elements of a lurid tale from a sleazy detective magazine.Â  Barbara Graham, abandoned by her 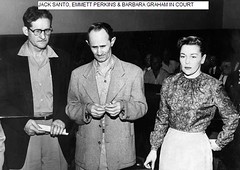 teenaged mother in years before, had spent time in the same reformatory where her mom was an alumnus. Barbara had worked as a prostitute, and had become addicted to drugs. She’d been introduced to her co-defendants by none other than her husband, Henry, a small time career criminal. It was rumored that not only was Barbara having an affair with Perkins – but also that she, Perkins, and were frequently engaged in threesomes. The press had a field day.

The crime itself was apparently the result of misinformation given to Perkins. He was told that Mrs. Monahan (former mother-in-law of Las Vegas gambler Tutor Scherer) had a sack full of money and jewelry that she kept in her home (the same kind of tragic misunderstanding would result in the brutal murder of the Clutter family in Kansas in 1959, and become the subject of Truman Capote’s brilliant novel, “In Cold Blood”).

On the night of March 9, 1953, the gang drove to Mrs. Monahan’s home in . Barbara knocked on the front door and told the woman that her car had broken down, and asked to use the telephone.Â  The men were waiting right behind Barbara and before Mrs. Monahan could respond, they all pushed their way into the house where they immediately started screaming at her. The gang of strung out miscreants kept demanding to be told where she kept her money and jewelry.

Mrs. Monahan repeatedly told the crooks that she didn’t keep cash at home, but they were so hopped up on drugs and adrenaline that they didn’t believe her.Â  One version of the story was that Barbara started to beat the victim with a pistol while the men laughed and egged her on. The older woman was beaten to the floor by “Bloody Babs”, as she would later be dubbed by the press, who then smothered the victim to death by tightening a pillowcase over her head.Â  Not surprisingly, Babs’ version of the story shifted the blame onto her partners.Â  But as far as the law was concerned, since all the defendants were present during the commission of the murder, they all shared the guilt.

It wasn’t until the suspects had been identified and arrests had been made that the tale would take a turn onto .Â  Once the drugs and false bravado had worn off and the specter of possible death sentences began to loom large, it was a sure thing that a member of the gang would look to the law for a deal. It was Baxter Shorter who decided to save himself by spilling his guts to the DA. Shorter was an ex-con and a known associate of LA’s premier gangster, the diminutive but lethal Mickey Cohen. Shorter’s friends got wind of his visits with the DA, and they became very nervous.

Baxter and his wife Olivia lived in an apartment at 121 N. Flower, and it was from that location that Shorter was kidnapped by two men. In a photo shown to her by police, Olivia identified one of 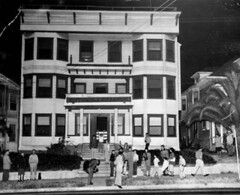 the kidnappers as Emmett Perkins. The other man was almost certainly . No shrinking violet, Olivia tried halting the kidnapping by brandishing a 30-30 carbine at the husband snatchers, but they told her that they’d shoot her where she stood if she didn’t back off. Olivia told the cops that she had seen a female in the men’s car. She wasn’t able to get close enough to provide a description of the woman, but she was able to describe the car as a 1951 Dodge or five passenger coupe – coincidentally, the same kind of car owned by Barbara. Once the car sped away, Baxter Shorter vanished forever.Â  Nary a bone fragment nor a tooth would ever surface, and he would be declared legally dead in 1960.

Barbara maintained her innocence until the end. Being a mother of three, she may have avoided the death penalty if she 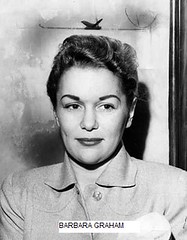 hadn’t made the mistake of offering a fellow inmate $25k to provide her with an alibi for the night of the murder. Unfortunately for her, the cellmate was actually a cop, planted to befriend her and gather information. Barbara’s blunder had doomed her to death.

Santo, Perkins, and Barbara would all die in San Quentin’s gas chamber on the same day.

Graham’s execution was the paradigm for cruel and unusual punishment and would be the topic of many impassioned editorials, even by supporters of the death penalty. On the morning of her execution she’d dressed in a beige wool suit and brown pumps, and had tried to prepare herself to face death. She was scheduled to die at 10:00 am on June 3, 1955, but was granted a stay until 10:45 am. Her execution would be delayed one more time, causing Barbara to ask “Why do they torture me?”Â  Finally at 11:28 am Barbara was blindfolded at her request, and was led from the holding cell to the gas chamber.

In a macabre moment the executioner, Joe Feretti, gave the condemned woman a bit of advice: “Now take a deep breath and it won’t be so bad” – to which she replied, “How the hell would you know?”

For a fictionalized account of Graham’s story, rent a copy of the 1958 film, “I Want to Live!” starring Susan Hayward.